The Microscopy and Characterization Suite in CAES is widely known as one of the top nuclear and fuels materials research labs in the world, but researchers at CAES saw the potential for a new application – solving an ancient archeological mystery.

Using a variety of electron microscopes and a Local Electrode Atom Probe (LEAP), CAES researchers are helping determine the identity of the “Bearded Man, 170-180 A.D.,” a Roman-Egyptian whose portrait adorned his sarcophagus. The researchers are working with a tiny sliver of wood – smaller than a human hair – from the portrait. The team of researchers has extracted several needle-tip sized fragments 20 nanometers wide as well as two thin foils. From that, they have been able to analyze and map the chemistry of the material in three dimensions.

The project is ongoing and the investigation continues, but researchers have already determined the pigment is synthetic and may have been created using a technique that historians thought was not developed until hundreds of centuries later. The data is being analyzed by researchers from the Detroit Museum of Art and their results may provide even more information about the Bearded Man and early development of artistry techniques. 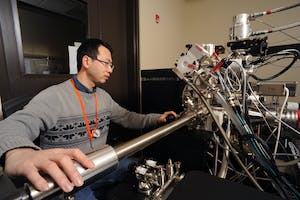